One cannot construct a weapons system for a battle that is already underway and expect it to do its duty.  That’s exactly how the situation was with putting floats on the Spitfire and Hurricane at the time of the Norwegian campaign in April 1940.  The Royal Air Force wanted to put its latest interceptor fighters on floats so they could operate in an environment that lacked the necessary airfields.  To hasten this program it was decided late April 1940 to adapt existing floats that had been designed for the Blackburn Roc turret fighter.

With the Norwegian campaign almost over the Air Ministry instructed Supermarine that the order for the floatplane fighter was cancelled yet issued other instructions to complete the aircraft.  The Spitfire/Roc float combination was not a happy union.  Testing got as far as water trials where it was found that this combination was totally unsuitable for the job it was designed for.

This little fiasco was to become known as the ‘Narvik Nightmare’ and despite its outcome the Air Ministry still wanted a floatplane fighter.  Supermarine were awarded a contract to now put the Spitfire F MkIII on floats.  Between June and October models of the F MkIII with two variations of floats underwent water tank trials at Farnborough.  The conclusion was that the seaworthiness of these floats were inferior to the those tested on the Spitfire F MkI.  Due to this disappointing result the Air Ministry, Ministry of Aircraft Production and Royal Navy decided against further development. This abandonment rivalled the previous nightmare and was known as ‘Nobody’s Child’. However Supermarine’s contract included the proviso that noted it the F MkIII project failed all design and development costings could be diverted to converting a F MkV airframe.

The Spitfire F MkV floatplane was first flown by Jeffrey Quill 12 October 1942. The 7.8 meter long floats mounted on cantilever legs were designed by Arthur Shirvall who had designed the floats for Supermarine’s Schneider Trophy Racers. Flight testing had proved satisfactory and in January 1943 the aircraft was taken to the Marine Aircraft Experimental Establishment at Helensburgh near Glasgow.

The Spitfire F MkV floatplanes were intended to intercept German transport aircraft that flew resupply missions to their garrisons on the Dodecanese Islands in the South East Aegean Sea. These Spitfires would be supplied by Royal Navy submarines and the flight would also include a Walrus amphibian, two high speed launches, five pilots and fifteen ground crew.

Testing was completed at the end of August 1943 and three aircraft was cleared for combat. They were dispatched to Egypt aboard freighter SS Penrith Castle and arrived Alexandria, Egypt 27 October. The plan to fly Spitfire floatplanes came to nought. The Germans had sent a large force to capture all the Dodecanese Islands and the logistics of supply by submarine was also questionable.

The three Spitfire floatplanes were re-assembled all the same and flown for a time at Egypt’s Great Bitter Lake. Problems were found with the aircraft immediately. Engine torque would do its best to bury one float under water during take-off. Large amounts of spray swept the rear fuselage causing severe corrosion there. Likewise the tail section suffered from corrosion due to spray whilst landing. By November the aircraft were back at Alexandria to be struck off charge back in England 28 December 1944.

In 1944 a Spitfire F MkIX was converted to a floatplane with the view of using it in the Pacific theatre.  Jeffrey Quill, Supermarine’s Chief Test Pilot first flew the MkIX floatplane June 1944 and noted its water handling was very good except there was a tendency for the aircraft to ‘tramp’ from side to side on its floats or to ‘waddle’ a bit when at high speed in the plane.

Deputy Chief Test Pilot Francis Charles Furlong flew the aircraft in July and reported the aircraft was directionally unstable.  He also took note of this ‘waddle’ and commented that it was impossible to correct and the aircraft had to brutally pulled off the water.  Furlong was of the opinion that for the aircraft to be taken seriously this waddle had to be corrected.

Once again the Air Ministry, after consulting the Admiralty, reached the decision to drop the project due largely to the inferior performance of seaplane to the landplane fighter.  Once again the Air Ministry asked Supermarine to submit a float variant of their Super Spitfire F.21 that had entered squadron service January 1945.  Finally this proposal ended all attempts to put the Spitfire on floats.

My idea to build a float version of the Spitfire rested with what kits I had play with.  Hobbycraft’s Griffon engined Seafire F XV was the basis for the build.  Contra-rotating propellers would be used to help eliminate torque, the larger tail unit of the (Trumpeter) Spiteful  would help with the stability issues and the large central float configuration from the (Tamiya) A6M5-N was used because I much prefer the look of that compared to the two large shoeboxes slung under the wings. Made from plasticard were the pylon to mount the central float and the carburettor intake. I affixed the Airfix stand to the main float using 3mm diameter silver-solder. It was finished in the markings for the catapult flight for the battleship HMS Howe which was the flagship of the British Pacific fleet. 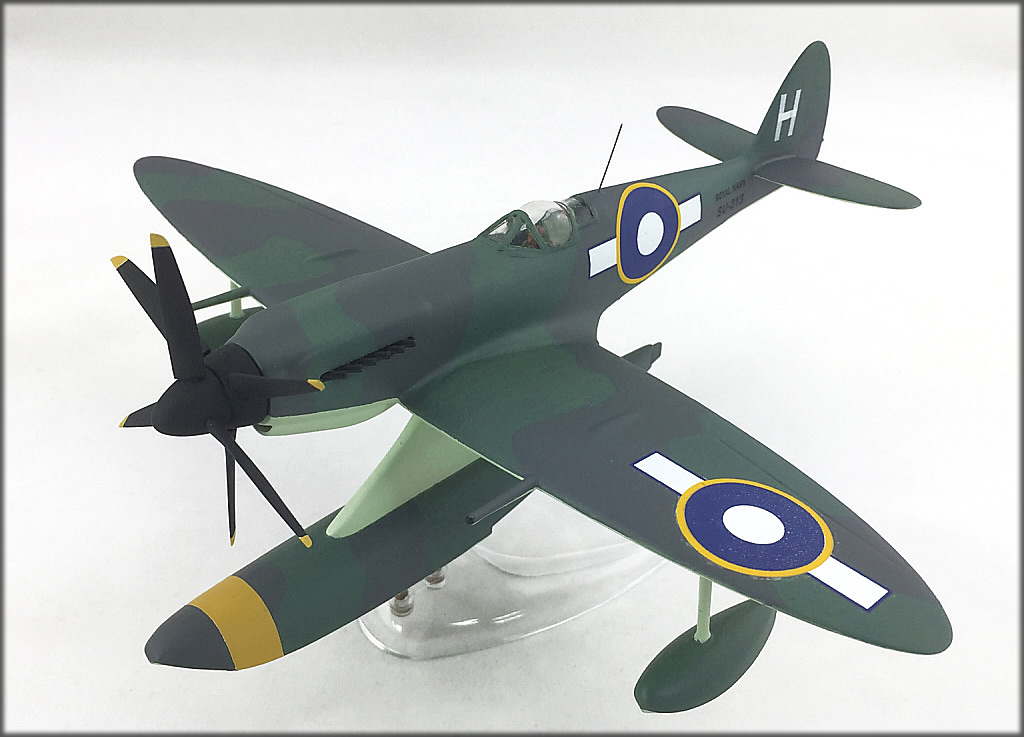