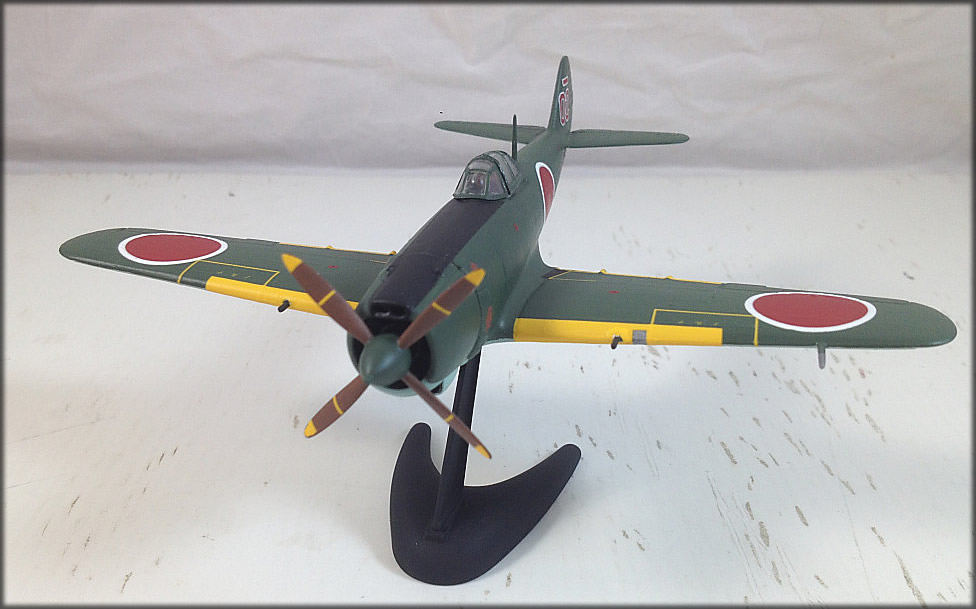 So much has been written about Nakajima’s Hayate (Tempest or Gale, take your pick but I prefer the former) so I’ll try and keep it brief and relevant to the Revell kit of 1964. For once reading the kit instructions properly was well worth the pay off. These notes include the following which I quote: “Your Revell model of the Hayate was scaled from the actual airplane on display at the Air Museum, Aviation Hall of Fame, Ontario, California. Squadron markings illustrate the 104th Fighter Sentai, based on the Japanese mainland.” This provided the foundation for the following text.

Without diminishing the accuracy of Brian Knight’s fantastic piece of box art, the fact is that the 104th Sentai’s (Group) area of operations was Manchoukou (Manchuria) which had been occupied by the Japanese since 1932 and not mainland Japan. This Ki-84 ‘industrial defence’ unit was formed November 1944 and were only to intercept B-29s twice when the USAAF Twentieth Bomber Command attacked the aircraft factory, rail yards and arsenal at Mukden. The first raid took place 7 December 1944 and involved a force of about ninety B-29s. Fourteen were claimed shot down, six of these claims were by the 104th Sentai. The B-29s returned 21 December as a smaller force of twenty-seven and the 104th claimed to have shot down two. The last missions flown of the war by this unit were against Soviet armoured columns that invaded Manchuria in what was then known as the ‘Seven Day War,’ 13-20 August 1945. Revell’s Ki-84 had a yellow spinner which signified it was with the 3rd Chutai (Squadron) of this Sentai. The B-29s that are being intercepted were from the 39th Bomb Group of the 314th Bomb Wing.

The Ki.84 referenced by Revell for their kit was built August 1944 [S/N 1446] and assigned to the 2nd Chutai of the 11th Sentai. This unit was sent to the Philippines 22 September 1944 and stationed at Clark Field, near Manila. Much combat was encountered and the 11th Sentai was virtually annihilated in this campaign. The Americans took over Clark Field 28 January 1945. Of two airworthy examples found there one underwent evaluation before being shipped to the US aboard the CVE-1 USS Long Island for further testing. In 1952 it was sold as surplus to Edward Maloney, owner of the Ontario Air Museum (Planes of Fame), California. Garrett-AirResearch Aviation Service, Los Angeles, restored it to airworthy condition and the Hayate flew again 25 June 1963. Given the civil registration N3385G it remained part of the Planes of Fame collection until 1973 when the aircraft was sold and returned to Japan. It was exhibited at the Arashiyama Museum, Kyoto, until the early 1990s when this museum closed. In 1997 it was purchased by Chiran Town, Kyushu, where it has been put on display at the local Peace Museum for Kamikaze Pilots. This museum was once a WW2 base where special attack missions were launched from. The Hayate is now displayed in its original unit markings of the 11th Sentai and is the only survivor of its type.

Thanks to “Krugerpedia” for this info!