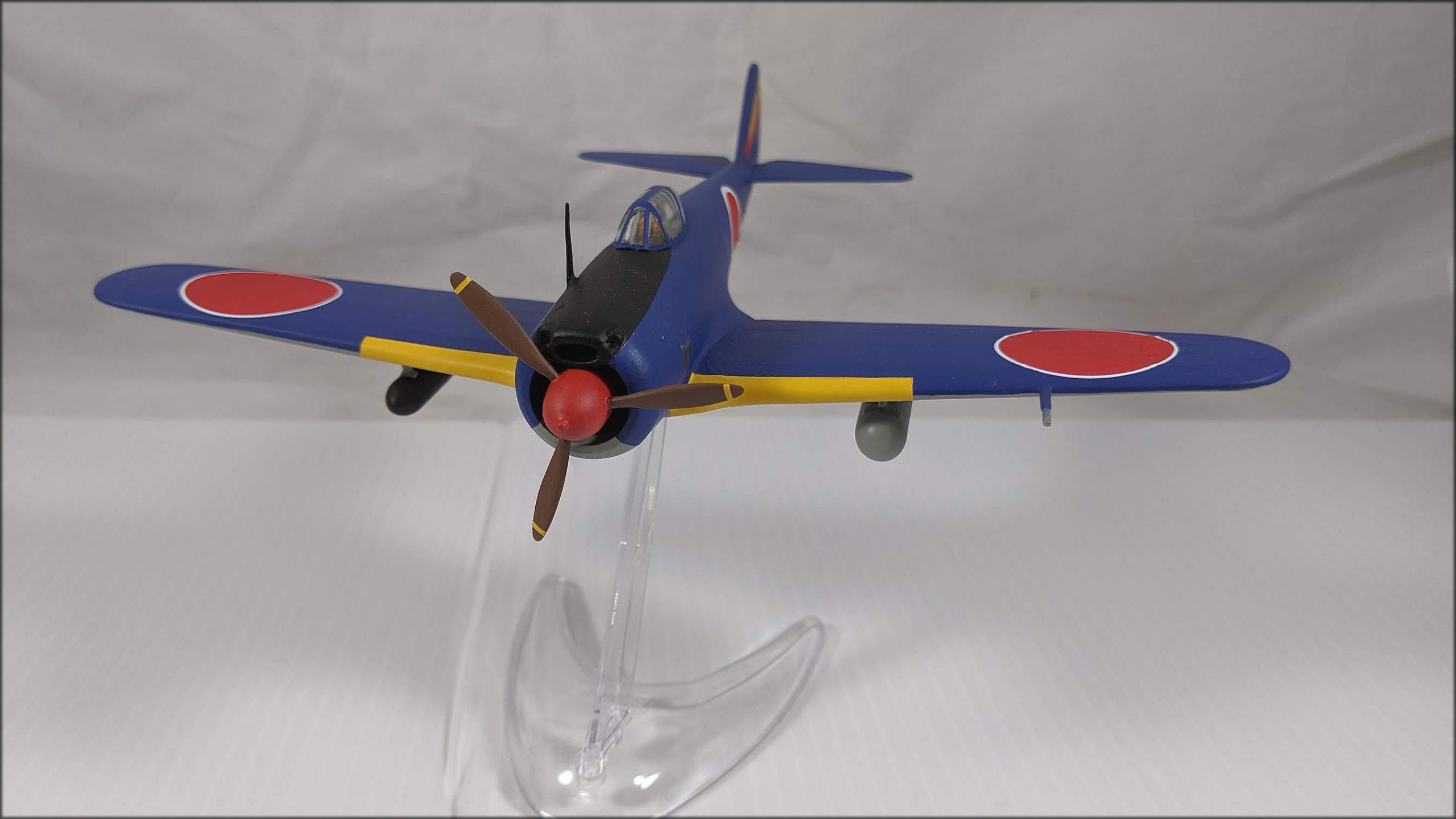 The lineage of Fuji’s 1/48 Hayabusa (circa 1972) goes directly back to the Marusan 1/50 kit of 1961. Marusan went bankrupt in 1969 and Fuji Plastic Model Kits was formed by former Marusan employees and they themselves were finished by 1975. What kit molds they possessed were then acquired by Sunny/Japan.

Despite the actual age of the tooling I was impressed with the simplicity of the kit and from being of that age when kits released had to be festooned with working action features that due to plastic stress may only work once when the model was completed, this Hayabusa featured a retractable main undercart and rotating prop. Both of which were left in a fixed. Looking at the accompanying extract from the kit instructions you can see how the main wing and fuselage surfaces mated. Once assembled there was no fuselage – wing root joint line or gap to deal with.

The blue scheme used is speculative at best. It was to be used for JAAF aircraft, 1944-45, that were involved in night or over water operations. This Hayabusa scheme was selected from Kenneth Munson’s “Fighters 1939-1945”. Other books that reference the blue scheme is Donald Thorpe’s “JAAF Camouflage and Markings WW2” and Peter Scott’s  “Emblems of the Rising Sun”. This last book offers that “photographic evidence confirming the blue upper surfaces has proven elusive.

Other JAAF purported to use the blue scheme were the Mitsubishi Ki-51 Sonia of the 49th Independent Company which can be built straight from the box courtesy of Hasegawa and Nichimo. There were also Mitsubishi Ki-46-III KAI bomber interceptors from the 16th Independent Air Squadron and the 28th Sentai that were purportedly thus coloured.

The Hayabusa thus painted was flown by the 20th Sentai. Berna decals were used and I had a great deal of trouble making them stick. Especially with the Sentai’s eye catching stylised ‘20’ on the vertical tail plane. When painting the yellow ID stripes on the wing leading edges I was advised by Bruce Pilkington to first put down a white undercoat. That worked a treat (thanks Pilko!). The 20th Sentai did initially fly night missions but spent most of its time based at Formosa with the unenviable interlude of fighting in the Philippines that included the air defence of Manila and convoy patrols. By February 1945 this unit was to have re-equipped with the Hayabusa’s successor, the Ki-84 Hayate but some records suggest the Hayabusa was still used by wars end.

As part of the 8th Flying Division, Formosa, it was tasked with providing fighter escorts to suicide aircraft bound for Okinawa. What gave me the idea to build the Hayabusa as a special attack aircraft was that during March – June 1945 twenty four pilots from the 20th Sentai undertook suicide attacks in this battle. I don’t know whether they flew their final mission enmasse or piecemeal in either  Haybusas or Hayates,  or if it was co-ordinated as part of the Japanese kamikaze defence plan of Okinawa known as Floating Chrysanthemums, but they bravely and stoically did their duty.

– thanks to Paul Kruger.