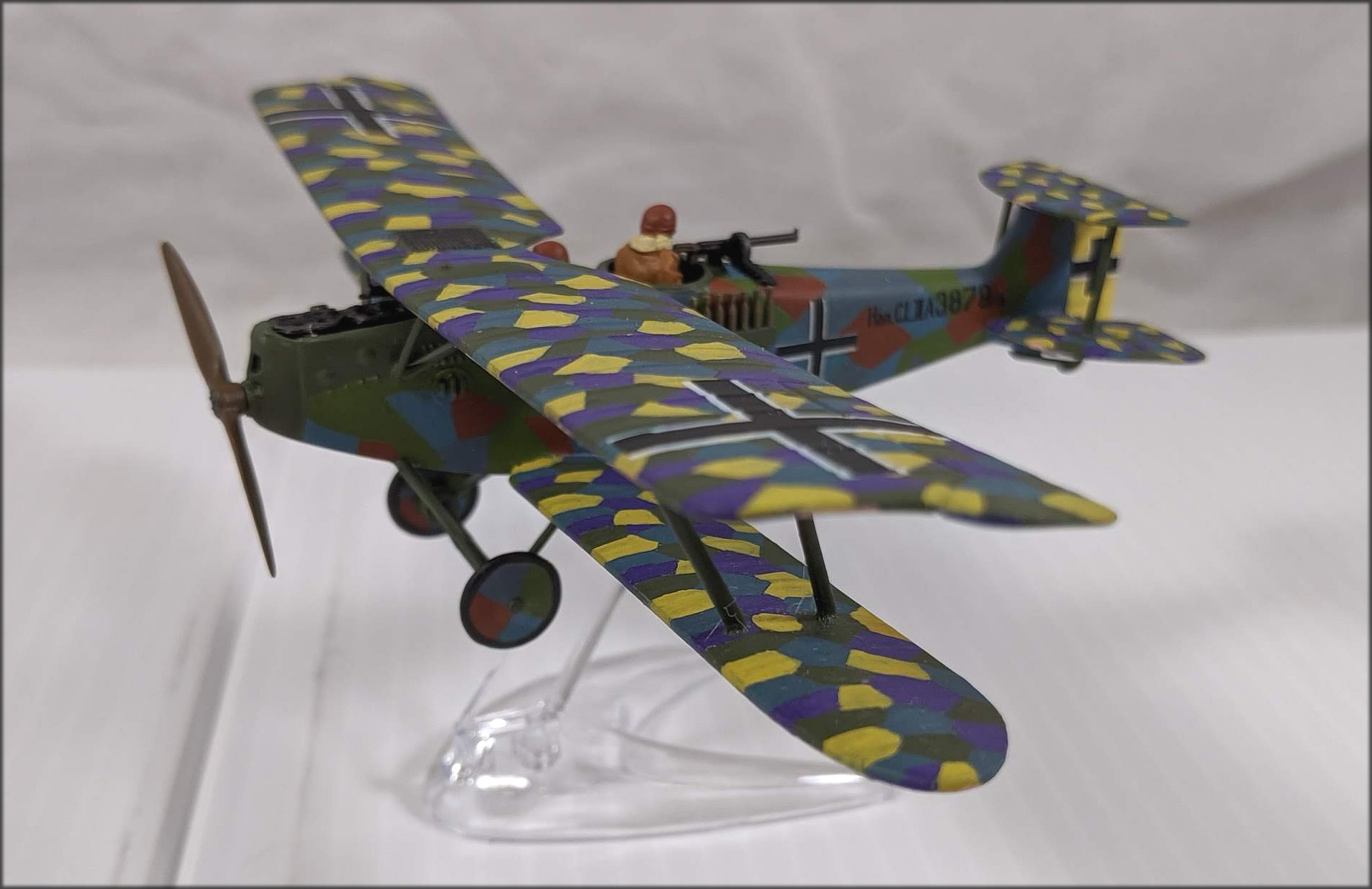 Airfix’s Hannover CL111a was first issued in 1967 and was a great follow up from their equable remarkable Roland C-II of 1965. The CL111a I built was a 1988 reboxing, and after a quick glance at Scalemates, we see that Airfix last reissued this kit in 2009. Airfix’s Hannover is (and probably will be) the only 1/72 injection moulded kit you can get of this type.

The real challenge of the CL111a build is the application of the lozenge camouflage.  As this camouflage pattern was brush painted it is expected this took more than a little time. The airframe was first painted in Humbrol Hu64 Light Aircraft Grey, the lozenge pattern then marked out in grey lead pencil and then it was the case of colouring by numbers.

The CL-series of aircraft came from a 1917 specification for a lightweight C-type aircraft (the C-type was defined as an armed two seat biplane). The CL would be specifically used for the harassment of enemy positions, whether it frontline trenches, artillery positions or rear supply areas, and their strafing attacks would usually be closely co-ordinated with troops on the ground.

Aircraft units equipped with this type were known as ‘Battle Flights’ and would have up to six aircraft. This was the maximum amount of planes that the flight leader could effectively control. When not on the attack, these CL-type fighters would escort the likes of the C-type aircraft doing some reconnaissance. Then known as Contour Fighters a more modern labelling of the CL duties would be Close Air Support.

The Hannover CL111a was built by the Hannoversche Waggonfabrik AG who were better known for building railway rolling stock. The CL111a followed the German convention of construction by having a plywood monocoque fuselage. It was an extremely compact design for a two-seater and was noted for its excellent manoeuvrability. Due to its size the CL111a was often mistaken for a single-seat fighter.

Its main unique feature was the biplane tail unit, something that may be seen on much larger aircraft. This tail configuration gave the observer/gunner a much wider field of fire compared to the using of more conventional tailplane. Early production CL111a also had reinforcing struts for the biplane tail unit, but later aircraft did away with these struts as the tail unit was internally strengthened.

By reducing the gap between the main wings as much as possible helped improve upward visibility for the pilot. A smaller chord lower wing helped improve downward visibility as well. The struts were all steel tubing, the centre struts being produced with streamlined cross section and the interplanes struts were circular tubing faired to streamlined cross section with wooden fillets that were bound by linen.

The difference between the CL111 and CL111a was that the former was powered by a Mercedes DIII six cylinder engine but as demand for the DIII to be put in fighters first saw it substituted with the Argus-Opel  AsIII  6cyl engine. Five-hundred and thirty seven CL111a were built. Some saw service with the Dutch post war.

One crew that flew the Hannover CL111a with some success was Unteroffizer Johann Baur (pilot) and Leutnant Georg Hengl (observer). They would fly one-hundred and sixty sorties and would be credited with six official and three unofficial victories. Baur was awarded the Iron Cross First Class and the Bavarian Silver Bravery Medal when on 17 July 1918 during a combat with seven French SPADs, he shot down two and forced another two down inside the German lines.